skip to main | skip to sidebar

We have babies coming out our ears here at Forest King! Rogue's babies are now 3 1/2 weeks old and are doing very well! Kyler gave birth to a wonderful litter of 6 babies on Mother's day! 3 boys and 3 girls, just like her daughter! Kyler going above and beyond by trying to give Rogue a break with feeding the babies for a bit! Rogue doesn't seem to mind too much!

We think all 12 babies have their families eagerly awaiting their homecoming in a few weeks! We are really looking forward to having all these babies grow up. With Rogue's babies being Kyler's grandbabies, it is pretty exciting!!

We have babies again here at Forest King! Rogue whelped a litter of 3 girls and 3 boys this morning! She was nice enough even to wait until daylight to have them! So far all are doing well and mom is very content! 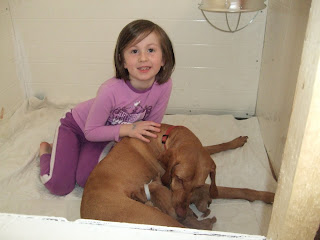 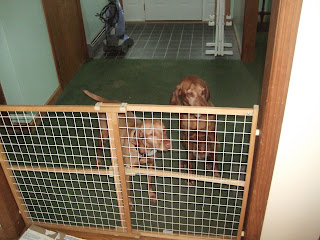 Here is grandma Kyler and great uncle Cedar waiting impatiently for the arrivals!

Our only dilemna now is that we have 4 reservations for girls and 2 for boys, so we have to make some adjustments somewhere! 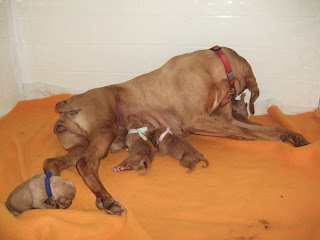 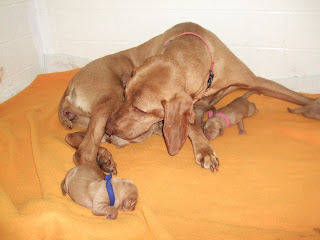 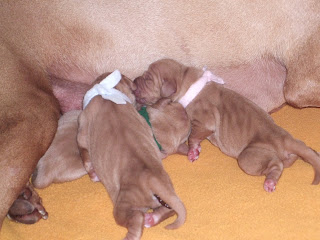 So, it's official! We have 2 litters on the way here at Forest King! We will have a wild spring, but it should be a lot of fun! We have an extensive waiting list for all these babies, we are hoping all are born happy and healthy! Rogue is getting very large and still has 2 weeks to go. Kyler is just beginning to get slightly thick in the middle. Hopefully as soon as I find my camera battery I will be able to post some pictures! Next blog will likely be when we have babies on the ground, yeah!! Stay tuned!
Posted by Kim at 8:33 PM 1 comment:

Puppies on the way!!

Well, we have exciting news here at Forest King!! Rogue is indeed expecting puppies! She is due April 25th and it looks like we have at least 6 puppies, possibly more! Rogue was bred to Widdershins Upwind Jozsi, owned by Andrew Campbell and Meg Riordan of The Regal Vizsla. Jozsi is a well bred and handsome field trial dog from Wendy Russell and Lisa Deforest's breeding.

These puppies should be some fabulous dogs both on the field and in the home! We are very excited to see how they turn out!
Below are 3 ultrasound pictures we took yesterday while confirming Rogue's pregnacy! How cute!! 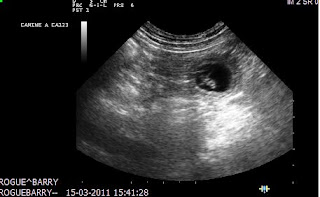 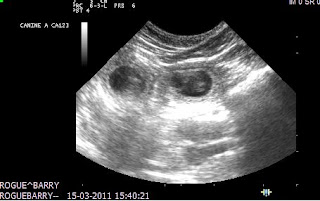 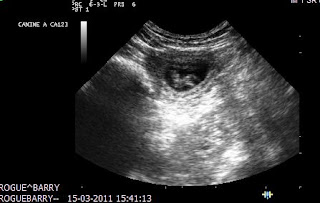 It has been a super long time since I have had any time to update my blog! Life with 2 kids and 3 dogs, plus a full time job hasn't allowed me to have any time to sit and type!

I am excited to announce the breeding of both Kyler and Rogue for spring puppies! Kyler has been bred to DC Fieldstone's Remington Ammo MH, from Huntmore Vizslas. She is due May 6th, we will confirm by ultrasound in early April. We have several really great families waiting for these puppies and I really hope that things work out well!
Rogue has also been bred and is due April 25th. We will confirm her pregnancy by ultrasound at the end of March.

Both these litters will make phenomenal field trial, hunt test, hunting and family dogs and we can't wait to see how everything turns out!

While things will be busy here this spring if we actually have 2 litters in the long run the timing will work out better for everyone involved! We plan to put our house on the market (after the puppies leave, of course) so that we can hopefully sell and build our dream house on our new 11 acre lot down the road! At the new location the dogs and us will have a lot more space to spread out and a lot more privacy!

As things progress hopefully I will be able to post pictures here for all to see!
Posted by Kim at 9:02 PM No comments:

Ok, so I have been too busy to do much with anything besides puppies, work and kids...I aplogize! So, here are a few pictures of the babies! Jaida is loving having them here! 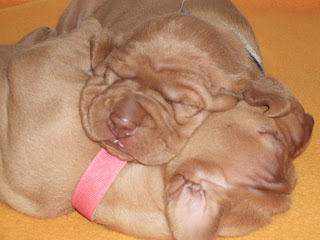 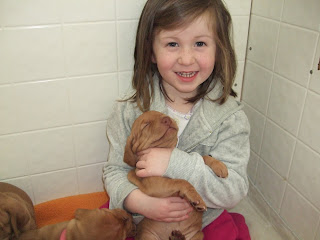 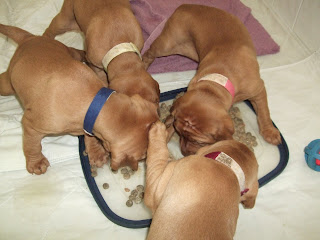 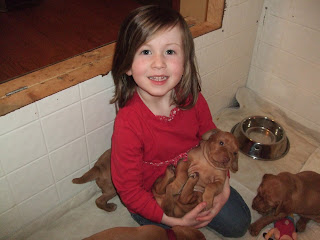 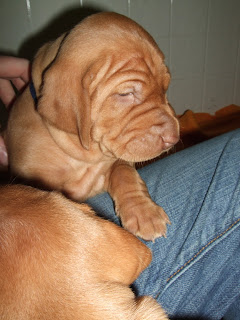 So, we finally have puppies here at Forest King! Kyler whelped a beautiful litter of 4 girls on January 13th! All 4 are spoken for. 3 of the puppies are going to nice family hunting homes and the 4th is going to the dad's (Duke) owner, Carrie Syczylo's owner. Carrie will be campaigning this puppy on the field trial circuit, so hopefully we will be able to see her on occasion if we are out at trials! 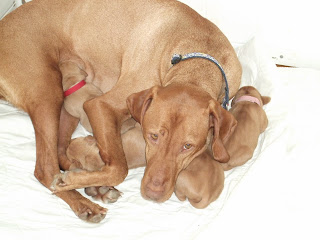 Here is Kyler with 2 day old puppies. "Mom, would you stop taking pictures of me, please!?"

The red and white (or now more like, tan) puppies sleeping. Red puppy was actually nursing in her sleep, it was quite adorable!

Here are all the babies eating! This was taken at about 5 days old or so. They are much bigger now! 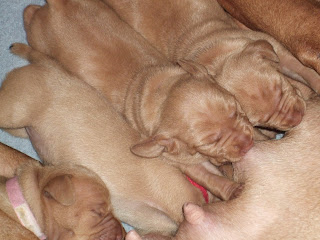 So far the yellow and white puppies are the tanks of the litter. They both surpass the biggest male puppy from the last litter we had (of the same breeding) They are little piggies! The pink puppy gained the pink collar as this was Rogue's collar last year and this puppy reminded us of her when she was born! She came out screaming! As I was helping Kyler to get the sac off of her head and clear her mouth and nose she was already yelling about it. She was basically still attached and was letting us know she was here! Time will tell if she becomes the next Rogue. The red puppy is quiet and peaceful so far. She is about the same size as the pink puppy. Even though smaller than their sisters by a few ounces, they are still bigger than the girls from last years litter, so I guess they are doing alright!

Rogue is doing well in New Mexico from what I hear. Chuck and Diane have started some ground work with her in preperation for her to be broke this summer. It apparantly took a little bit, but she is starting to get it. (she doesn't like to sit still!) She has been on a bunch of wild birds and apparantly also found a jack rabbit! Vizslas were bred to hunt fir and feather! So, the plan for her is to continue to train and then compete at the National Vizsla Association national field trial in Missouri in mid-March. We aren't sure yet if we are going to make the drive down or not. 21 hours each way with a 4 year old and a 5 month old might be tricky! We'll see!

Kim
I work as a surgical nurse in an emergency veterinary hospital. I live in North Central Massachusetts with my wonderful husband, Mike, my 5 year old daughter, Jaida, our 1 1/2 year old, Kalyn, and my other "kids" Cedar, Kyler and Rogue, the Vizslas. Of course I can't forget the chukar, quail, pigeons and chickens too. The game birds and pigeons are really the dogs pets, however...